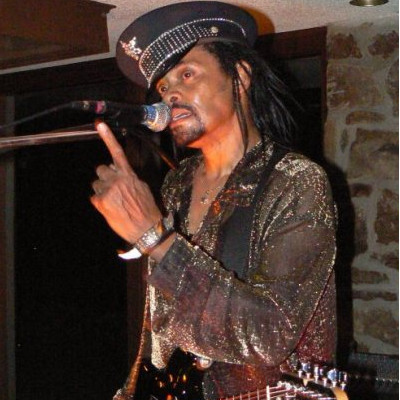 Thanks Marty. This week on From the Archives of Something Blue we’re hearing some real blues recorded at Bluesday Tuesday.

Billy Jones Bluez is from Central Arkansas so Bluesday Tuesday in Newport was a good fit for them with less travel time than driving all the way to Jonesboro. I got to record them at KASU Bluesday Tuesday on August 9, 2011, and I have played recordings from this show on Something Blue many times.

What can I say about Billy Jones? He writes great songs and also picks great cover songs for his repertoire. He’s an outstanding guitarist and vocalist. He leads a great band. He’s an exceptional showman who adds a lot of humor to his show. And he is very versatile playing blues, country, and rock. Whenever I have seen him play he always put on a show. He’s a real entertainer.

For today I picked the blues classic, “Hurts Me Too” and there will be more songs from this same show on Something Blue this week. Here they are now, Billy Jones Bluez, playing “Hurts Me Too”.

And that’s Billy Jones Bluez playing “Hurts Me Too” at KASU Bluesday Tuesday on August 9, 2011. Now that’s the blues.

This is Hairy Larry inviting you to enjoy Something Blue every Saturday night at ten. This week we’re featuring Dirk Quinn, Billy Jones, and Soule Monde. For more about the show visit the Something Blue website at sbblues.com.